David Winters in West Side Story

Born in the UK, David became a child singer, dancer, and actor, when his family moved to the USA, and he appeared in 150 TV shows and 12 Broadway shows from age 13 to 16. At 17 David was the very young Baby John, in the original Broadway show “WEST SIDE STORY”. He was A-Rab in the film version of “WEST SIDE STORY” that won 10 Academy Awards and established David as a teenage star.

David teamed up with Paul Simon (Simon and Garfunkle) in a singing duo “David Winters and the West Siders”. David and Paul wrote the songs with David singing lead. These records can still be bought on the internet today.

After West Side Story, he opened up a dance school and taught many stars including Ann-Margret, Raquel Welch and Richard Chamberlain.

David with his 1st of 6 Emmy Nominations

The Academy of Television Arts and Sciences wanted to acknowledge David’s contribution, but had no category, so they created one for David “Outstanding Achievement in Television”.

Next year the Academy also wanted to nominate David for an Emmy for his TV Special The Ann Margret Show. The Academy created an “Outstanding Choreography” category, and nominated David. One of David’s proudest achievements in his entire life, is that because of him, there was an Emmy category created for Excellence in Dance on TV that still exists today.

David has produced/directed over 80 features and over 200 TV shows and films including: 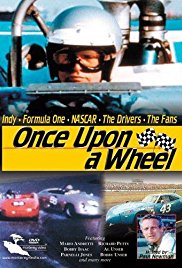 Once Upon a Wheel starring Paul Newman 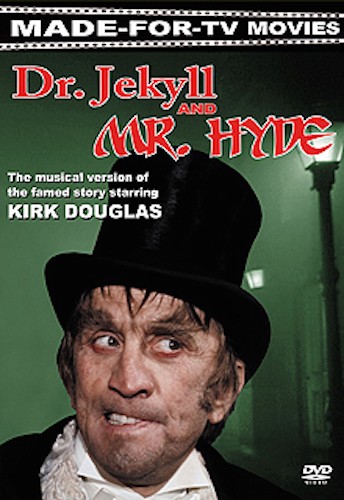 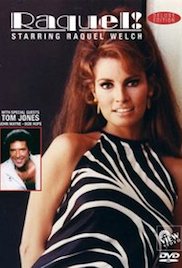 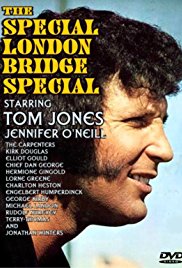 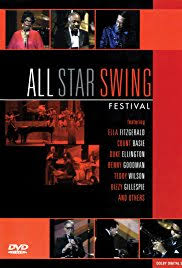 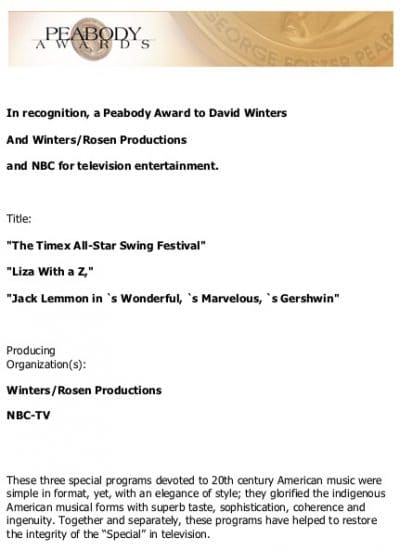 Totally amazing. Great movie. A must-see over and over and again and again! The crowd in the theater went wild! This movie is Magic!

Dancin’ – It’s On! is his latest and best film of his career. Dazzling editing and scenic shots really work well, but the dancing is everything in a musical and this is a great showcase for talented people. Even Winters get to bust a move! Make time to see it in a theater and have a fun time. Enjoy!

Dancin’ – It’s On! is a delightfully engaging Film; a modern day ‘Dirty Dancing’. Most admirable was how the Director stayed true to this BEAT throughout! It is impossible not to lose oneself in the exuberance of this cinematic experience.

The King Maker looks like it cost 100 million to make. The scope of The King Maker is epic like “Lawrence of Arabia” or “Ben Hur”…every scene is awesome and beautiful. Congratulations, Mr. Winters and Thank You.

The genius of David Winters as producer-director-choreographer is apparent in every part of this hour special.

A jewel is a stone until it’s cut by an artist who places it in a setting that points up its beauties. What David Winters produced and directed was plainly a television phenomenon.

A very Special Special… Most dazzling ever made…

“ONCE UPON A WHEEL”

Spectacular. Paul Newman and celebs performed for director David Winters with joie de la cause. A poetic study of man and machines… Incredibly moving. Most exciting.

As spectacular perhaps as anything in the history of show business. It was David Winters’ staging at its best.

Simply Stunning. It was terrific… It’s not every night that President Ronald Reagan and The First Lady sit in the Met’s central box and madly applaud.

ALICE COOPER’S “WELCOME TO MY NIGHTMARE”

The most impressive theatrical rock production ever mounted. Directed, choreographed and co-produced by David Winters. A stunning visual journey.

The hit of the Cannes Film Festival is David Winters’ “The Last Horror Film”…my favorite horror movie at Cannes this year.

THE BEST ROCK MOVIE EVER MADE.

A masterpiece directed by David Winters… Unique and special… It was astonishing to see. Marvelous musical. Remarkable.

Spectacular direction and camera shots on the part of David Winters. Ambitious and successful… A special SPECIAL!

In 2015 David wins Best Director Award & His Film DANCIN’ IT’S ON! Wins Best Editing & Best Music Score at the WIDESCREEN FILM & MUSIC VIDEO FESTIVAL at the AMC Cinemas in the USA. Here he is on the RED CARPET. 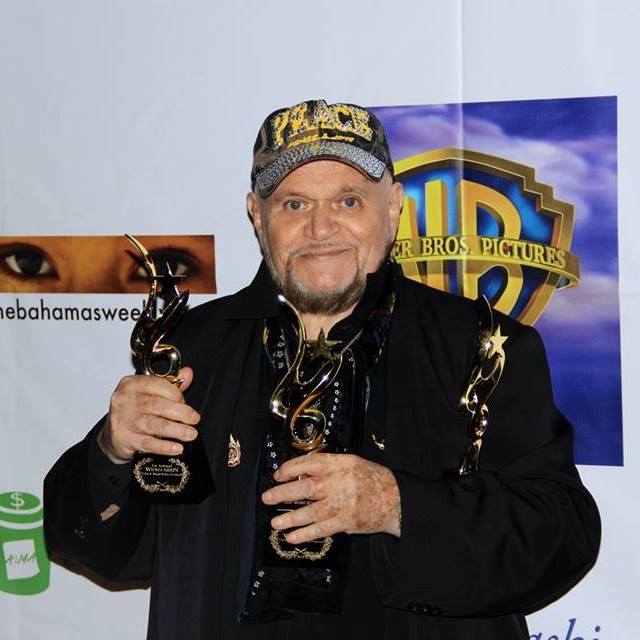 He choreographed the first Rock TV series “Shindig”, and was choreographer/dancer/singer on “Hullabaloo” the Rock/Roll series where he created the worldwide dance craze, “The Jerk”.

David staged and directed 2nd Unit on the film “The Island of Doctor Moreau” starring Burt Lancaster and Michael York. David then set his sights on directing and producing.

His first directing assignment was the 2 year Emmy Winning TV series “THE MONKEES” where he actually created what we now call music videos. He also created, staged and produced the Monkees World Tour. The opening act for the Monkees was a young man then unknown to the world, by the name of Jimi Hendrix.

He also did 2 “Diana Ross” TV Specials where he choreographed Michael Jackson who was a guest star. From that day forward David and Michael became close friends until Michael’s death.

Next he Created, Directed and Choreographed the Alice Cooper Rock and Roll Spectacular World Tour “WELCOME TO MY NIGHTMARE”. The show’s huge success inspired him to make a film of it, and to release it in 1,000 cinemas in the USA through his own Company. Something no one else has ever done to this day.

David then Co-Starred, Directed, Produced, and Co-Wrote the Multi Award Winning motion picture “THE LAST HORROR FILM”. For this film he won the Paris Film Festival Award , the Los Angeles Golden Scroll Awards, the Sitges Film Festival Award, and a nomination by the Hollywood Academy of Sci-Fi, Fantasy and Horror as the Best Film Of The Year, but lost out to Mel Gibson’s “The Road Warrior”.

Then with his good friend Hugh Hefner, owner of Playboy Magazine he Created, Produced, Directed, and Choreographed the music video “GIRLS OF ROCK AND ROLL” which become the highly successful long running Las Vegas show of the same name.

David choreographed the “T.A.M.I. SHOW” the first concert movie ever made with a cast that included The Rolling Stones, Diana Ross & The Supremes, James Brown, Marvin Gaye, The Beach Boys, Chuck Berry, Smokey Robinson and the Miracle, and every other major act of the day. In 2006, the “T.A.M.I. SHOW” was voted by the US congress to be installed in the National Registry as a film treasure, and to be preserved for ever. David decided to produce and direct a film called “THAT WAS ROCK”. He took Chuck Berry into a studio and created wraparounds and intros to the “T.A.M.I. SHOW” and to the “TNT SHOW” another film concert. In it’s review of “THAT WAS ROCK”, Rolling Stone Magazine, the Bible of rock and roll, is quoted as calling it “THE BEST ROCK MOVIE EVER MADE!”

After this, David directed “THRASHIN”. A modern West Side Story on skateboards. He asked the film’s financiers on two separate occasions to let him cast an unknown at the time Johnny Depp to star in the film, but they refused saying “this kid will never make it”.

So he found another unknown young actor Josh Brolin, and cast him as the lead. Recently Josh Brolin was nominated for the Academy Award, as Best Supporting Actor for his performance with Sean Penn in “MILK”. He was also the star of the Academy Award Winning film “NO COUNTRY FOR OLD MEN”, two Oliver Stone films “Wall Street 2” and “W.”, as well as “Men in Black 3”.

For the soundtrack of “THRASHIN” David also discovered some unknown musical groups and introduced them in the film. They are The Red Hot Chili Peppers, Meatloaf, The Bangles, and All The Fine Young Cannibals, who all went on to have No. 1 worldwide hits. “THRASHIN’” is the favorite cult film for skateboarders today.

Because of the Johnny Depp incident David decided not to make any more films that he did not totally control himself. In the next 8 years David produced, directed, financed, and distributed 48 films through his own companies West Side Studios and A.I.P Studios.

CENTER OF THE WEB stars Tony Curtis, and Robert Davi

David then created a USA theatrical division called West Side Studios to play his films in cinemas. He also opened A.I.P. Home Video, and released 2 titles a month on video for 6 years.

In Romania he filmed the pilot “Star School”, a musical TV series which won First Prize at the world famous Montreaux TV Festival.

In 1998 he founded, Equator Films, a UK Production/Distribution Company that he listed on the London Stock Exchange in 1999. His expansion plans included buying Isleworth Studios, where the Academy Award winning film THE AFRICAN QUEEN was shot. Equator then purchased Handmade Films, the most prestigious UK Production/Distribution Company for 14.5 million pounds. Equator’s name was then changed to Handmade Films PLC.

The new Handmade’s 1st film was “PLANET 51” written by Joe Stillman (“SHREK”, “SHREK II”), and was sold to SONY for all USA rights. They released it in 3,000 cinemas. It stars Dwayne “The Rock” Johnson, Jessica Biel, John Cleese and Gary Oldman. It grossed over $60 million in the USA. George Harrison of The Beatles fame created Handmade Films.

The next film David produced was in Thailand, the Epic Adventure film “THE KING MAKER”. It stars John Rhys-Davies, star of all 3 “LORD OF THE RINGS” films, and “INDIANA JONES”. Also starring in the film is Gary Stretch, Cleitus in Oliver Stone’s “ALEXANDER”, and nominated for a U.K. AWARD for “DEAD MAN’S SHOES”. Gary is the ex WBC Light Middleweight World Boxing Champion.

All U.S.A. rights to “THE KING MAKER” were purchased by SONY STUDIOS, and UNIVERSAL bought foreign territories. With CHINA FILM, in China, it had a very long theatrical run. The film played theatrically in Thailand, where it received 4 Thai Academy Award nominations and won The Star Entertainment Award. It won the Silver Ten Award as Outstanding Film at the Film Festival in Mumbai, India. In Russia alone it sold over 200,000 DVD’s. It is the only Thai Film ever bought by a Major Hollywood Studio, and sold in 36 countries, making it the most successful Film ever made in the history of Thai Cinema.

David is very proud and honored to be the narrator of The King of Thailand’s personal DVD project “THE ROYAL PROJECT”.

After this Mr. Winters co-starred in the film “HANUMAN THE WHITE MONKEY WARRIOR”.

He can currently be seen on Hallmark’s TV in the mini series “BLACKBEARD” as Silas Barber.

Mr. Winters sees a great future in the USA, European, and Asian entertainment industry and spends a great deal of his time traveling between these continents. Although he holds both U.S.A. and British citizenship, he proclaims to being a citizen of the world.